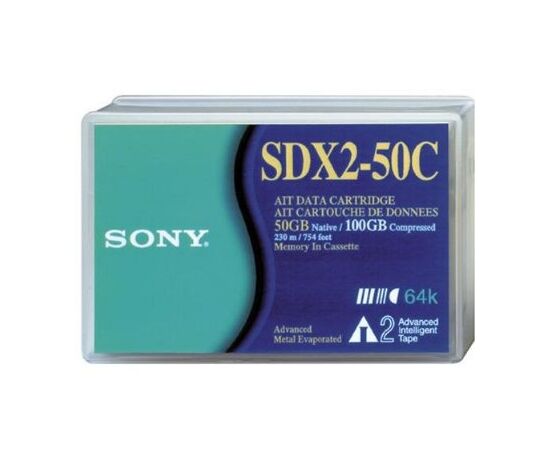 Sony SDX2-50C is a tape designed for AIT-2 drives and has a storage capacity of 50 GB native and 130 GB compressed on a tape of length 230m. It features Sony's patented AME (Advanced Metal Evaporated) technology which is a process of depositing a 100% pure cobalt layer directly on to the base film without adhesive or binders that maximizes the quality of recording. It also features DLC (Diamond Like Carbon) coating on the surface that maximizes reliability and life of the Sony AIT-2 tape. Another key feature of the SDX2-50C is that it has MIC (Memory In Cassette) chip that has a memory of 64K. This allows it to store file tables and table of contents so that the user can access the file quicker thus saving time and increasing life of the tape as it is used less. It also increases data integrity as the MIC stores a list of files separately from the tape itself. The SDX2-50C thus boasts maximum reliability and life.
Type: Storage media - AIT.Media Included Qty: 1.Native Capacity: 50 GB.Compressed Capacity: 130 GB.Tape Length: 230 m.Recording Standard: AIT-2.Advance Metal Evaporated (AME) Diamond Like Carbon (DLC) surface.
Brand
Find similar Sony
MPN
SDX250C
Color
Size
Find similar