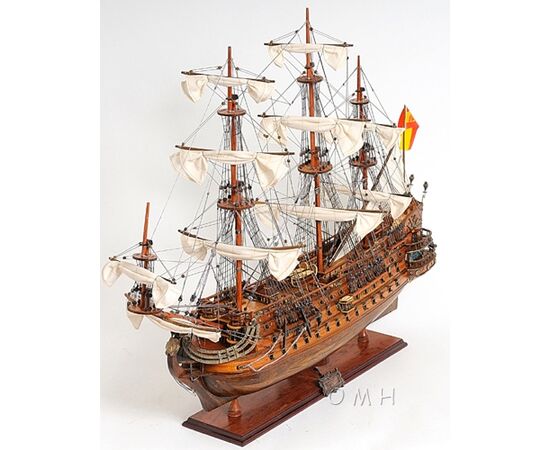 100% hand built from scratch using "plank on frame" construction method.
Hundreds of hours is required to finish a model.
Completed models contain thousands of details created by our skillful master craftsmen.
Made of finest wood like Rosewood, Mahogany, Teak and other exotic tropical wood.
Chrome and brass fittings and ornaments constitute the excellence of our models.
Extensive research through original plans and pictures make our models authentic.
Each model goes through a demanding quality control process before leaving the workshop.
Just the perfect gift for home or office decorator, boat enthusiast or passionate collector.
Our models have all the little details that would amaze you the moment you see them. Just look at them and you will highly appreciate not only the skills but also the time that our master craftsmen spend on each of these models.

The San Felipe was built by King of Spain and launched in 1690, was one of the most beautiful Spanish galleons of the XVII century. She was the lead ship of the famous Spanish Armada. The San Felipe displaced more than 1000 tons and was armed with 96 cannons, enabling her to take on the most formidable ships in the French and British navies. The San Felipe's role in the war against the British and French was to help protect Spanish settlements and harbors, to transport treasures, and to safeguard the long and hazardous passage back to Spanish ports.In 1705, she participated in a furious and heroic battle between 12 Spanish ships and 35 British ships. After 24 hours of battle, she was captured by an English ship, but was so badly damaged that she could not be salvaged as a prize. She went down to the bottom of the ocean with several tons of gold.